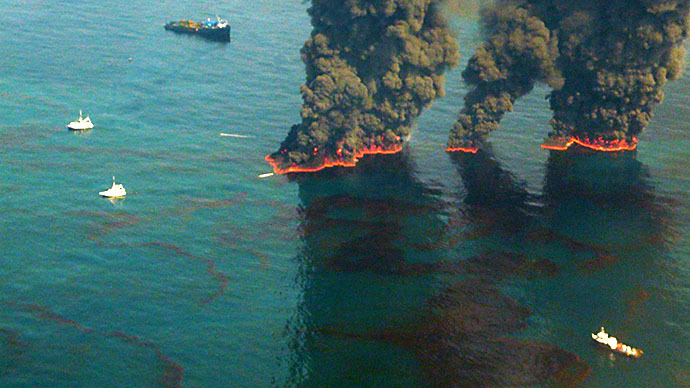 WASHINGTON: BP agreed Thursday to pay a record $4.5 billion in US fines for the 2010 Gulf of Mexico oil spill and will plead guilty to obstruction and criminal negligence in the deaths of 11 workers.

The company’s reputation was ravaged after an April 20, 2010 explosion on the BP-leased Deepwater Horizon rig killed 11 workers and unleashed the biggest marine oil spill in the industry’s history.

Thursday’s settlement does not close the book on the British energy giant’s lengthy and complex legal battle over the devastating spill and must still be approved by a federal judge.

BP is also still on the hook for economic damages, including the cost of environmental rehabilitation, and could pay as much as $18 billion in civil penalties.

The massive criminal fine — which will be paid over six years — will be relatively easy for BP to absorb. It has a market value of $127 billion and last month hiked its shareholder dividend after posting a bumper third quarter profit of $5.43 billion.

BP also signaled it will continue to aggressively pursue damages from rig operator Transocean and subcontractor Halliburton, which was responsible for the well’s faulty cement job.

“Today’s agreement is consistent with BP’s position in the ongoing civil litigation that this was an accident resulting from multiple causes, involving multiple parties, as found by other official investigations,” the oil giant said in a statement.

BP vowed to “continue to vigorously defend itself against all remaining civil claims and to contest allegations of gross negligence in those cases.

” Thursday’s settlement includes an agreement to plead guilty to 14 criminal charges, 13 of which are “based on the negligent misinterpretation of the negative pressure test conducted on board the Deepwater Horizon,” BP said.

The obstruction of Congress charge stems from two false statements BP made about flow rate estimates from the runaway well.

Group chairman Carl-Henric Svanberg said the “resolution is in the best interest of BP and its shareholders.

” BP shares rose slightly on the news even as the energy giant said it will increase the amount it intends to set aside to cover all compensation costs to almost $42 billion from $38.1 billion. Much of that charge has already been absorbed on its balance sheets.

Environmental group Greenpeace was quick to slam the settlement as inadequate.

,” Greenpeace senior investigator Mark Floegel said. “Nothing in this proposed settlement gives any oil company incentive to be more careful in future operations.

Cutting corners and skimping on safety will still be the rule of the day.” BP chief executive Bob Dudley issued a statement expressing the company’s deep regret for the loss of life during the accident and for the spill’s impact on the Gulf coastal region.

“From the outset, we stepped up by responding to the spill, paying legitimate claims and funding restoration efforts in the Gulf,” Dudley said.

“We apologize for our role in the accident, and as today’s resolution with the US government further reflects, we have accepted responsibility for our actions.

” Earlier this year, BP reached an agreement to settle claims from fishermen and others affected by the disaster for $7.8 billion, but it must also still be approved by a federal judge. Over the past two years, BP has so far sold non-core assets totaling more than $35 billion to help fund the cleanup and compensation costs.

BP recently unveiled a massive strategic deal with Russian state oil firm Rosneft in an attempt to reposition itself after the Deepwater Horizon catastrophe.

Analysts believe that the Rosneft deal could lead to major exploration projects in the Arctic.